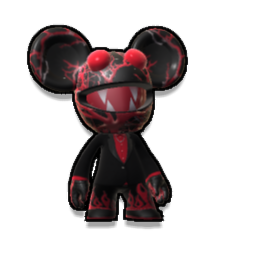 My name is Joel. Here's a story that happened some time ago: I’m interested in loads of people like Daft Punk and Madden and Dillon Francis, but I found something scary one day though. I was browsing YouTube a couple days ago to see if there were any cool tracks released by one of my favorite artists that I didn’t know of.

I got interested in what deadmau6 has done. I went to his channel and a 6 minute long video was uploaded just six minutes ago called "you can't escape".

I thought the title was some silly joke and clicked the video because deadmau5 is known for being a troll.

The image of the video was a demonic dead mouse. The first 3:33 minutes were a normal, if a bit scary, version of deadmau5s standard music. Then at 3:34 it went silent and stayed that way for 6 seconds. The remaining amount was extremely distorted, sounding like static and a growling monster.

I was terrified and exited the browser and didn’t return on it for a week, using Chrome instead for that duration. But when I started using Firefox again, I heard a ding dong at my door. It was the mail! I went and opened the door, but there was only a small figurine that looked like a demonic deadmau5. There was a sticky note on it, it said '''YOU'RE NEXT!''' written what looked like red permanent marker. But it wasn’t. It was real blood and I could smell it.

I grabbed the figurine, drove to town threw it in the middle of the road when no one was looking, and where it got ran over and destroyed by various cars. I still have nightmares about the mau5head to this day. I am writing this on my laptop on this wiki.

Wait, I am seeing something outside my window. It’s red, and shaped like a mau5head...

Retrieved from "https://spinpasta.fandom.com/wiki/The_Unknown_Deadmau4_Track?oldid=49237"
Community content is available under CC-BY-SA unless otherwise noted.