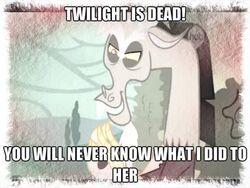 I never really watched My Little Pony: Friendship is Magic that much, honestly the only thing that got me hooked on the show was Discord. I really love Discord.

Yet one night, while I was surfing through the Web, I came upon an add for a bootleg episode of MLP titled "Discord's Revenge."

"Sweet," I thought. I'd been kind of hoping another episode with that chaotic draconequus.

Now I was on Ebay at the moment, and rarely do I ever buy anything over the web. Yet the price this guy was putting for this was at a steal.

I thought. Of course I believed this to be a scam. Yet what kind of con man tricks a guy out of just a dollar?

After a bit of thought, I decided to buy it anyway. It was just a buck after all, almost like whoever owned it wanted to get rid of it.

A week later it came in the mail.

I was so happy to see Discord again.

The way they just dropped him after two episodes the way they did, just turning him back to stone. Discord deserved way longer than that.

Now I was watching TV alone, being as I put this in at 10 o' clock at night. My parents were out cold, as were my little brothers and sis, even my dog too.

So it was just me and good old Discord.

The menu screen comes up; it's just a pic of Discord with a black background. He's holding a sign with the play option. Nothing else.

Which I did find a bit odd. It felt like something you'd see on an older DVD.

Looking back, I wish I didn't press that play button.

The episode starts off with The Kingdom of Equestria, yet unlike the happy, sunny land it usually is. It is raining.

Still this wasn't the strangest part, the rain was red, like blood. Also, it looked so... real. Not like computer graphics or anything. But just... real.

And the buildings, a few of them were floating in mid air, as was something Discord was known for, yet suddenly they exploded one by one.

While they did so, I kept hearing the cries of people. To me, that felt too real, not like it was scripted, like someone was truly in the houses, crying for help.

I found this a bit creepy to say the least.

Just then Discord walks onto the screen.

The draconequus is holding an umbrella, yet it's inside out, as was his usual style of not making sense.

As he walks on screen, he says:

"I'm sure someone is watching... I pity the soul of that person"

He stops in the middle of the screen, and turns to face me. He just stands there for about... I'd say fifteen seconds. Then he smiles.

Yet unlike his usual cheerful smile, this one felt... sadistic, like whatever he was about to do something truly evil.

I was silent, still trying to figure out where this was going.

He raises his griffin hand and points it at me.

Then suddenly, my body feels something all over, I soon realized I couldn't move. I was paralyzed.

I tried screaming for help, yet all I can do now is breath, and watch Discord.

"Y'know it wasn't very nice for Twilight and her little friends to do what they did," Discord said. "But you know what time it is?"

I simply blinked, since I could nothing else.

"Payback time," Discord says as he now reaches down to something off screen, only to reveal Princess Celestia's decapitated head.

My eyes grew wide with shock. I tired to utter a sound, yet again I was incapable. I half expected this show to cut to the opening song, to give me some peace of mind from this madness I was now seeing.

"Well, let's get to the fun," Discord says and then teleported away.

The scene then cuts to the Canterlot Sculpture Garden.

Where I was now shown Twilight along with the rest of the mane six, and Spike the dragon. They were all chained upon separate marble tables.

He looks at the screen and chuckles, this chuckle turns into something of an inhuman, demonic laugh. As if some devil were speaking through this cartoon character.

He goes to Applejack's table first, he walks to where her backside is. Through the blood-red rain I can see her tears.

I was then witness to Discord fucking... YES, FUCKING, the orange pony.

This lasts for maybe two minutes, then Discord stops.

Discord used his magic and a chainsaw appears in his hands.

What happened next was like something out of those Pony.MOV video's that hotdiggedydemon makes on YouTube. Y'know, the one about the shed?

Except this one stayed on Applejack. The blood and brains flew everywhere as Discord mutilated her.

He moves on to Pinkie Pie, does her, then rams a shotgun up her butt hole, and fires. Her body busted into a bloody, gory, mess.

Rainbow Dash gets her eyes gorged out, followed by lit dynamite being put in their place. She goes boom, bits of fried pony pieces flying everywhere.

Rarity is fucked next, then gets hacked with a machete.

Fluttershy was the next to get boned, followed by getting a knife in the back. Which Discord then removed, and ripped out of her spine like a Mortal Kombat game character.

He now goes to Spike, and proceeds to engulf the dragons head into his mouth in a cartoon like fashion. Discord then bites Spike's head off and eats the skull, making a soft crunching sound.

"Mmmm," he says rubbing his gut.

Now only Twilight Sparkle is left.

"Now what am I going to do to you Twilight?" Discord asks.

The little pony is bawling out of her mind in fear.

Discord then looks back at the screen.

"Y'know, I'm pretty sure you're already traumatized out of you mind. I'll cut you a break."

Discord snaps his figures and the screen goes black. I still can't move as I hear the last pony screaming in unimaginable pain, followed by sounds I couldn't even recognize.

Five minutes of this passes, and then Discord snaps again and I can move once more.

He's standing in the center of the screen, but I can't see Twilight.

I prayed he didn't tell me.

"Too bad," he says "I won't give you the satisfaction of knowing how she went. Forever it shall haunt you all! And I will haunt you all! Your imagination will run wild trying to figure it out, and a little chaotic piece of me will be with you always and forever. Goodbye."

The credits roll and I feel really messed up.

Quickly I turned off the TV, yet Discord was right. My mind buzzed with how the final pony died. I went to the kitchen and dug into my parent's liquor, thinking that maybe getting wasted would make me forget all this. And man, did I want to forget badly.

Just then I awoke in my bed. It was morning.

"It was all a dream?" I thought looking around, everything looking normal now.

Yet just then I noticed something in my trash can. This was odd, since garbage day was today, and I hadn't thrown anything in it the night before.

Curious, I picked it up; it was a sheet of paper. On it was a picture of Discord drawn in what I guessed was blood.

He was holding Twilight's head up.

Below the picture were the words:

Retrieved from "https://spinpasta.fandom.com/wiki/The_Lost_Discord_Episode?oldid=50915"
Community content is available under CC-BY-SA unless otherwise noted.